The bear and the mother are the two people in your life who can’t (or can hardly) understand that… “THE BATTLE GAME CANNOT PAUSE!”. That’s why they always make you stop the long Kill chains or the tight combat like strings to come down to the house to eat, take you out or simply reply to messages. If you accidentally get caught up in the game and forget to react to the “orders” they give, just be confident that you will get sick soon after. But to be honest, most of the time we will decide to follow the call of our heart.. ie just sit back and play the game.

That’s right, because with stressful and open-ended games, it’s dead like PUBG nice Fortnite, then taking your hands off the keyboard is a death sentence you’ll give yourself. That’s why the countless bears of young gamers out there are using Fortnite itself to test their lover’s heart.

It all started with a Tweet that is being spread across the Internet.
​

In this tweet, Nicole’s account is titled “Romance is not dead yet..” with a screenshot of the text message with her boyfriend. In the message this guy said: “I’m hiding in the bush to text you back.” … For those readers who don’t understand, in games like Fortnite or PUBG, hiding in the bushes will help gamers have Can hide somewhat from the enemy’s line of sight. And that’s why if a guy has to find cover just to reply to a message, that message must be very important, leading to the girls creating a movement on the Internet that is texting to ask for their lover.
​ “So are you hiding in the bushes to text me?”
Short answer… Screenshot.​

Read more:  Vote for the most attractive villains in anime/manga (P.1) 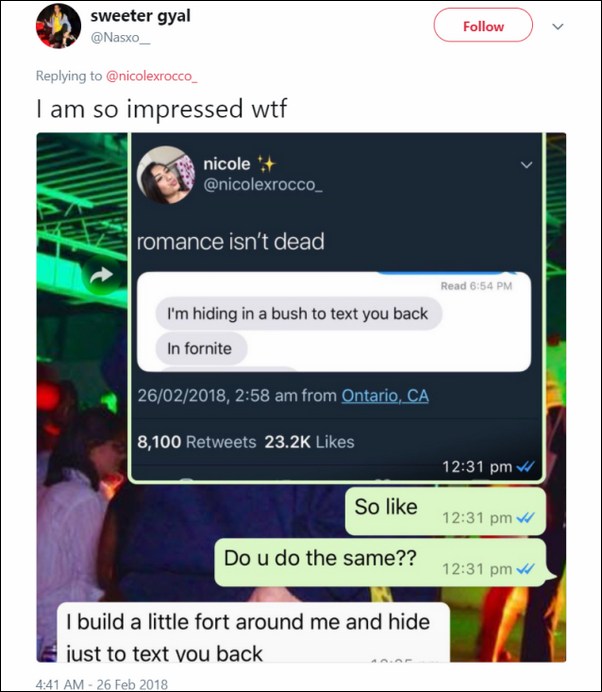 And it was the FA guys’ turn to use it to confess..​ And the guys are even more awesome..
“I hope you will be like that in the future.”
“I’m texting you with one hand while running around the map… I don’t need to hide.”​

However, there are also a series of guys who fail this test. Below are the girls with the list of “lovers who care more about Fortnite than girlfriends”.
​ And in some cases the decision for the game is more important than the bear..
“I’ll have to choose between you and Fortnite…”
“I just spent $25 to buy Fortnite’s Season 3 Battle Pass.
So the choice is obvious.”​

So, if you, who are reading this, see a certain message while you are playing, then you know what to do. If not… can be like the writer, wait until the game is over and then text back. Much safer in the game where you can still make up some excuse for the delay in replying. It’s all up to you because practically no law can apply to the superiority of creatures called “bears”.
​