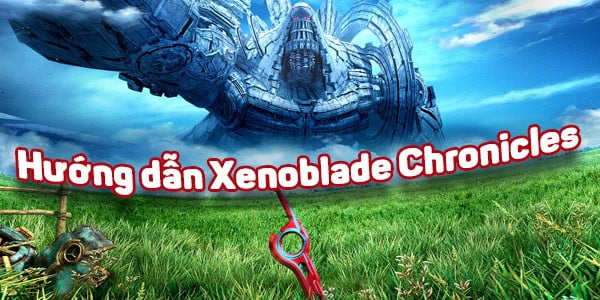 The small Xenoblade Chronicles Definitive Edition tutorials below will Help those who have never known the game get acquainted faster, and enjoy the game fully, even less shocked by the huge amount of content of the Game. This Nintendo RPG masterpiece has a lot to explore, so let’s not wait, let’s join now.

1. Learn carefully the instructions to play in the game 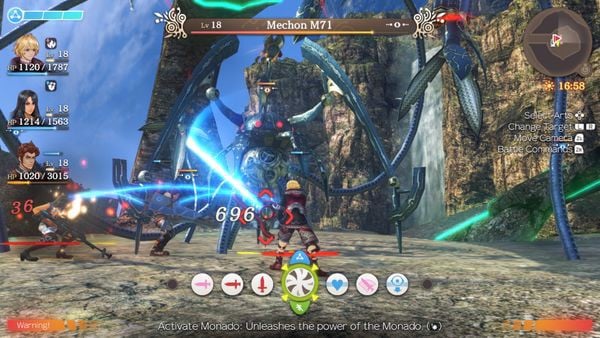 Xenoblade Chronicles Definitive Edition is a game with very deep gameplay, especially the extremely complex combat (combat) part. When you just look at the game’s interface when fighting monsters, you will surely be overwhelmed with a series of dense icons, indicators and information. Then there are things like attack effects, front and back coordination, future changes, Chain Attack … Too many things, too many mechanisms to follow and need to care about. But don’t worry because the development team was very dedicated to making the very detailed, intuitive, and easy-to-understand Xenoblade Chronicles tutorial.

Instructions Xenoblade Chronicles in the game are described with pictures and examples, not only for combat but also for exploring the outside world. Once you understand them, you will see the full beauty of the game. In addition, to avoid lengthy while the game takes place, the detailed information about each gameplay mechanism is in the Tutorials section of the System Menu (press + to enter). You can review and delve deeper into the gameplay here, very useful, do not ignore it.

2. Take time to explore the world 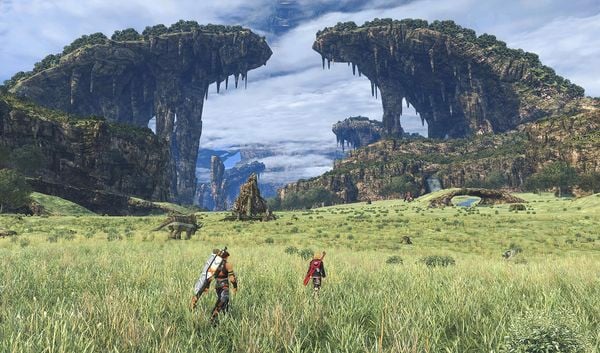 One of the things that made the Xenoblade Chronicles Definitive Edition so famous was its enormous world. Spend some time running around exploring new locations, taking in the game’s diverse and beautiful views. World exploration is not in vain. You can “quick travel” back and forth to the places you have discovered, saving a great deal of time on quests. Besides, your character also gets experience points to level up when finding new lands.

3. Get all the side quests but don’t worry too much about them 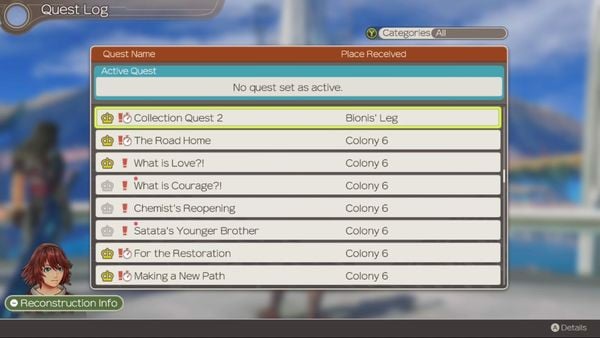 Xenoblade Chronicles Definitive Edition has 449 side quests, an impressive number. Most of them have similar structure like “kill 5 A monsters”, “find 2 items B” … So you don’t need to worry too much about missing out on some of these quests. However, try to talk to all the NPCs, take all the quests you can, because this is a better way to level up, make money better than simply practice. You get paid to go out and fight monsters that get both experience points, items, and rewards.

Read more:  Players are not afraid of rain and How to protect Nintendo Switch when the rainy season comes

Most of the game’s side quests do not require you to return to speak to the NPC upon completion. The reward will be given to you immediately upon reaching the eligibility of the mission, extremely convenient. So just take on quests a lot, then on the way to fight monsters, the quest will complete by itself. The side quest system is built to motivate players to explore the vast game world. Of course there are missions that require more work. 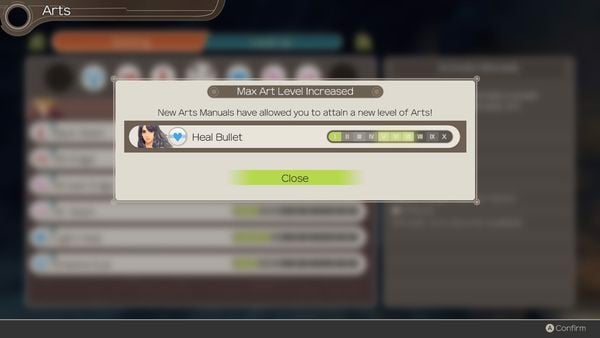 Like every other role-playing game, you need a lot of money to spend in Xenoblade Chronicles Definitive Edition, from buying weapons, armor, to helping people around … Actually, when you visit the shop in the game, please Priority is given to buying the books of the “Art Manual” section first. They are essential.

Art says easy to understand is the character’s move. These moves can be upgraded to become stronger (level Art). Initially, an Art can be up to level 4. But if you use the Art Manual, you can raise the level limit for the respective Art. There are two types, the Intermediate Manual opens up to Level 7, and the Advanced Manual allows you to upgrade to level 10. If you want to get strong, you must buy the Art Manual to open the limit to level up. If you bought it, go to the Art section of the menu and you will be automatically updated, not have to click to spend each one.

As for other equipment, sometimes you can do quests, fight monsters, or explore the world. At the beginning of the game, the weapons were also outdated very quickly, going through a new point that almost had to be replaced. From the middle, it is more reasonable to invest heavily in weapons (when there are weapons against Mechon). 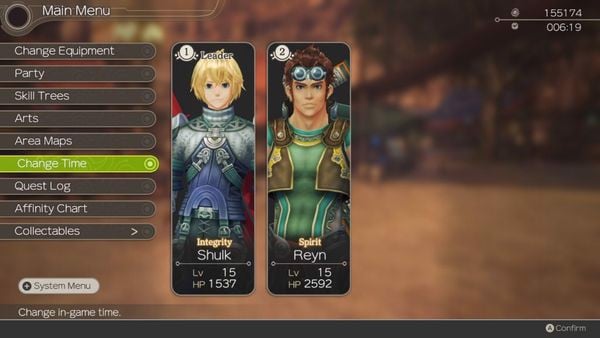 One minute in real life is equivalent to one hour of the Xenoblade Chronicles Definitive Edition. You can adjust the time in the game by going to the main menu and selecting “Change Time”. Why do we need to do this? Because some monsters, such as Aqua Nebula, only appear during a storm. Time of day changes will bring about random weather changes. Instead of waiting and not knowing when it will rain, you can actively change the time continuously to “call” the rain more quickly. For good results, adjust the timer to about every 2-3 hours.

6. Don’t sell things for fear of short of money If you are short of money, do more sidequests, and if you can pick up from monsters, take it easy. Many of the items in the game are used as ingredients, or for other purposes. You will be sorry to sell them so cheaply. Besides, only selling items dropped from monsters or collected in large quantity, you can definitely earn it again to avoid selling the wrong rare items. Especially, the item with an exclamation mark next to it should not be sold because it is needed for the quest. If you’re scared, don’t sell anything.

7. Take down as many Unique Monsters as possible Unique Monsters are monsters with special names, you will know as soon as you contact them that the background music “You Will Know Our Names” pops up. Defeating these monsters for the first time will be collected for the characters Affinity Coin, which is very important for creating Skill Link. The more Skill Links you have, the more Skill Links you can create, the stronger your character will be. Xenoblade Chronicles Definitive Edition has a total of 157 Unique Monsters, some of which may disappear as the story progresses. Find them as soon as possible.

Note that Unique Monsters are much more difficult than normal monsters, their stats and skills are stronger, so you need to be prepared when entering the match. 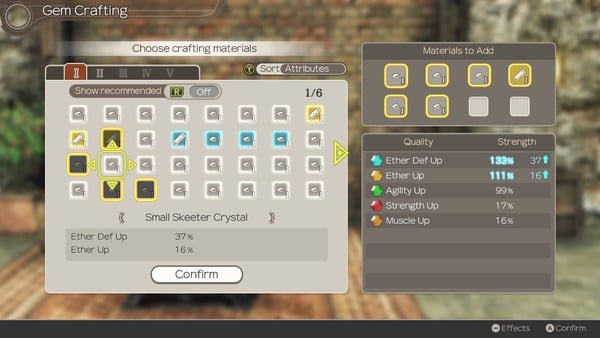 You will meet Gem Man very early in Xenoblade Chronicles: Definitive Edition. His stalls allow you to train gems with various effects. When attaching them to weapons, equipment (must have jewel slots), of course, your character will receive more powers. It will make a noticeable difference in quality compared to wearing casual weapons.

Before you train your gems, you need to get Ether Crystal. They can be exploited differently in the outside world, on the map there is a symbol of a pickaxe. You can make a note to return to the extraction as needed. 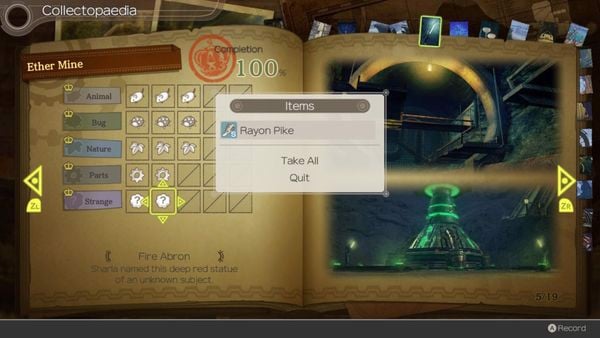 Collectopedia is part of the Collectibles menu that you can easily forget. It is like a small collection of creatures and plants characteristic of each area (each page is an area you have visited). You need to donate the item you have collected (in the blue light spots around the game world) to Collectopedia with the requested name. Thereby in exchange for useful in-kind gifts, such as Gem (gem to increase the power of weapons, equipment), even new weapons and armor. 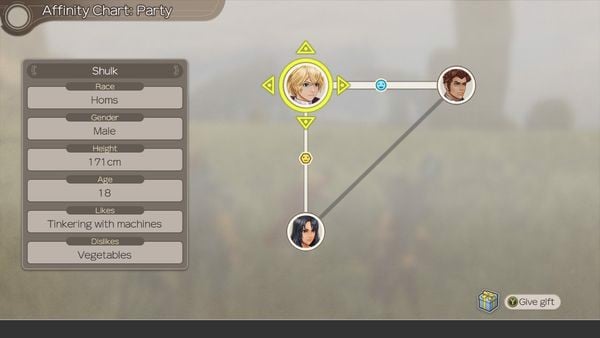 The friendship between the characters in the game is shown by Affinity. This stat between two characters will increase when they do quests together, fighting together. The higher the intimacy level, the more benefits, from creating more Skill Link, to crafting a better Gem. If you only control Shulk, it will make it difficult for many other characters to develop a level of intimacy with each other.

Try switching leaders and team members after a while to rebalance. Giving the right gift is also a way to increase Affinity between characters (if the gift is hated, it will be deducted points). 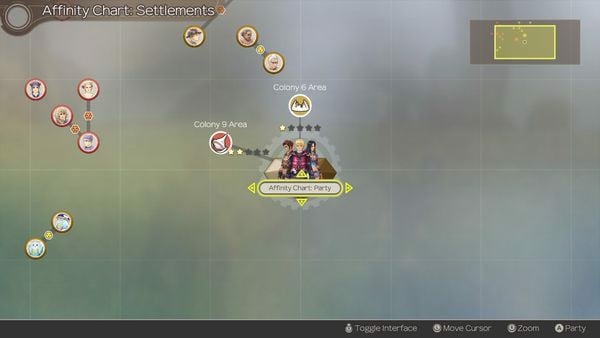 Affinity is also available on external NPCs, and by region (NPC Affinity, Area Affinity). In particular, Area Affinity is more important, depending on the reputation (Reputation) of you in that area (on a scale of 1 to 5 stars. When this stat is high, you can get more quests from people. people, or exchange rarer items.

Hopefully this Xenoblade Chronicles tutorial has been helpful to you. The game is available for sale at nShop. You can choose to buy two versions from the link below:

Maybe you are interested: Remastered and Remake, 2 gamers headache concepts and how to distinguish them!