Zelda Breath of the Wild – A game over 4 years old, what else can you explore? 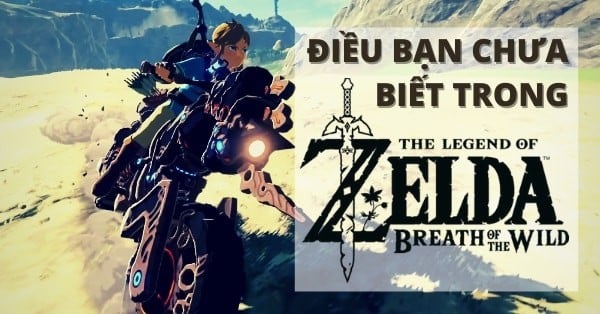 The Legend of Zelda: Breath of the Wild continues to attract new and old players even after having been out for more than 4 years. For new players, this is a world they’ve never thought of, a world where you can literally go anywhere you want. As for old players, up to now, the game still has a lot of new things that they have never fully discovered, even when the last update of the game is on 8/8/2017.

So Zelda Breath of the Wild Is there anything else that you do not know? Let’s take a look at 20 interesting things in Zelda that you may not know yet!

Fly across the map with Bomb Impact Lauches

Bomb Impact Lauches is a way to use the Bomb rune in Zelda to create thrust, helping to fly extremely long distances very quickly, without wasting much stamina. BIL is formed by a wonderful physics mechanism in Breath of the Wild: Explosive bombs create thrust, when detonating the second ball will cause the target to be thrown further away.

You can learn how to use Bomb Impact Launches according to the video above to easily cross difficult terrain, making the plowing less difficult. Especially when you have mastered this technique it is possible to take advantage of it to complete the challenges in some special shrines very quickly. 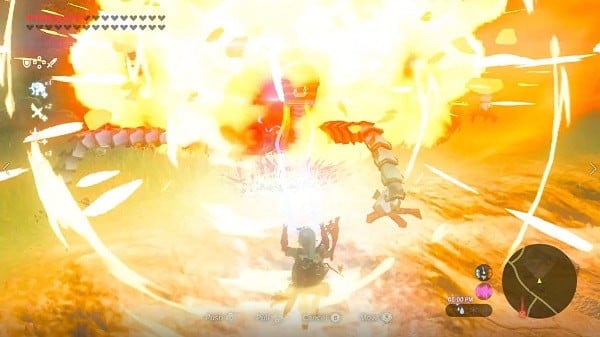 In Zelda, there is a Rune system to assist you in exploring Hyrule and its benefits are extremely great. Use the Rune Magnesis to lift a metal item to block the attack and the Guardian’s vision. If blocked for too long, the Guardian becomes confused and immobile.

Lizalfos has a blind spot 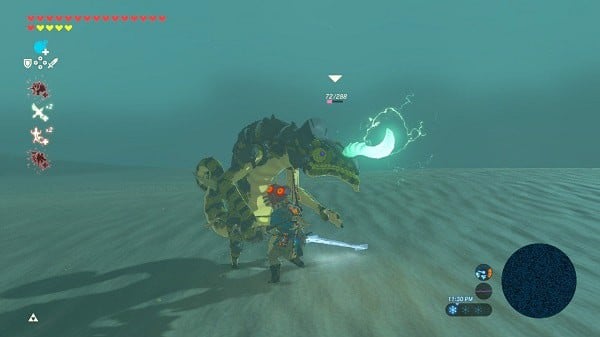 Lizalfos or lizards / geckos etc. have quite wide viewing angles but they have a blind spot just below the chin. If you stand just below their chin Lizalfos cannot see you at all. Peace of mind that spoiled for handling them only!

At night, you will sometimes be attacked by a swarm of bats, which is quite annoying when the number of them is quite large. 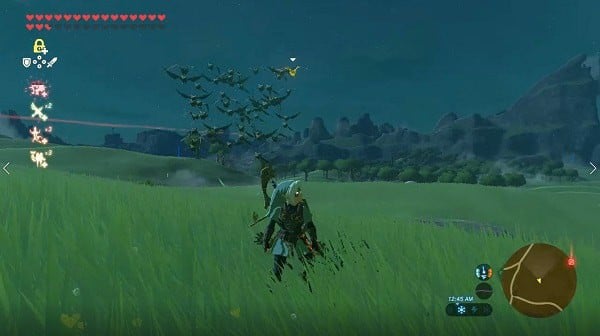 To be able to chase them away, you just need to use Stasis + on one of the flock, the rest will automatically turn away. The rest, you can just leave that Keese to save your weapon or take it off!

Two-handed weapon attacks will deal damage on the head 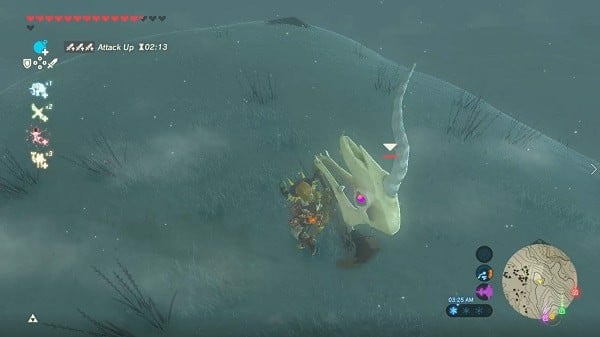 When using a two-handed weapon attack, you deal damage from above your head, so you can apply it when standing close to targets higher than Link to be able to damage them like Lizalfos .

Can attack enemies by sliding the shield

Zelda Breath of the Wild’s shield in addition to blocking, counterattack and slip out, you can also use it to attack enemies. Just jump and slide the shield on top of them! 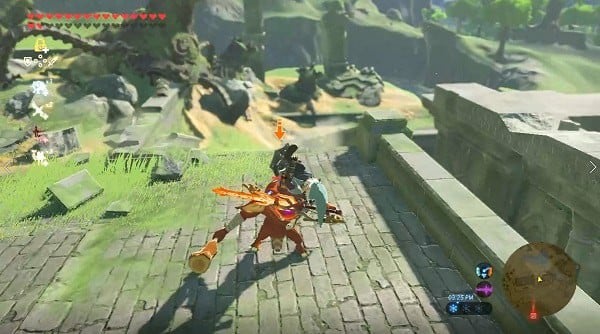 Without taking down Hinox, you can still get a weapon 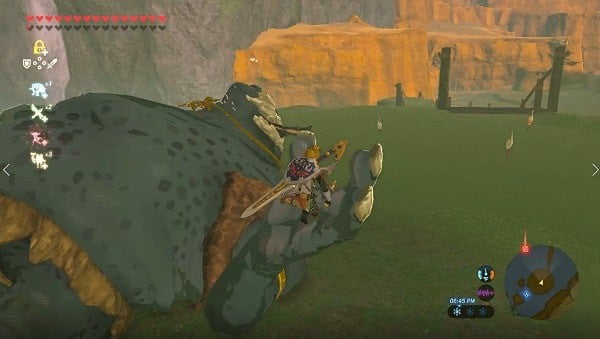 For those who are just starting to play Zelda, the one-eyed giant Hinox may be difficult to deal with when you do not have enough weapons, but the rewards dangling from their necks are quite attractive. Then sneak up on his hand, when Hinox puts her hand on her stomach, you just need to quietly pick up the weapon!

Lower Hinox is easier with the name Bomb 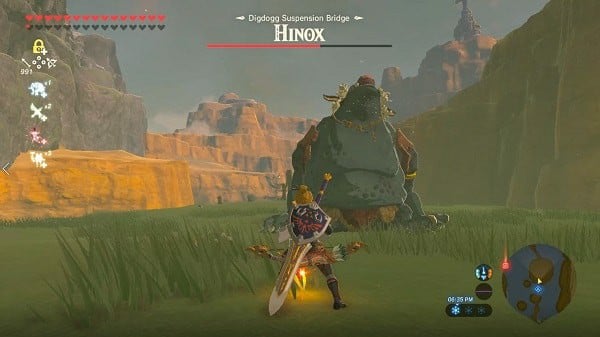 Everyone knows that Hinox’s weakness lies in the only eye, when you shoot an arrow in it, it will painfully cover your eyes, you can use that time to attack. But have you tried to shoot with the name Bomb yet? When the Bomb is shot in the eye, Hinox will be stunned for a long time, allowing you time to defeat it! 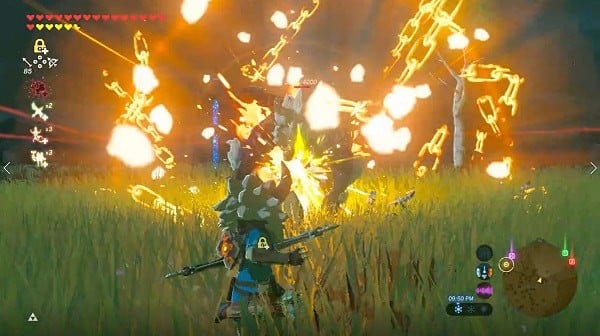 Aim at a target, and when the arrow comes out, immediately use Statis + on that target, then continue firing the arrow. Using Statis + will help you cancel your first attack, so you can continue your 2nd attack, giving you more damage time.

Buy hell with food in the cold 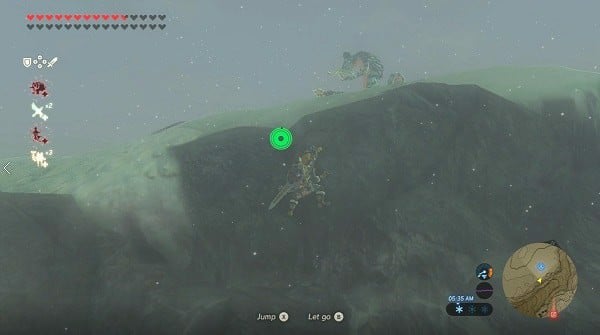 You can throw food to distract monsters. In a cold area, food will be frozen while it is halfway through, the monster will frustrately throw the food down and then pick it up again to eat so you have almost twice the time to distract. 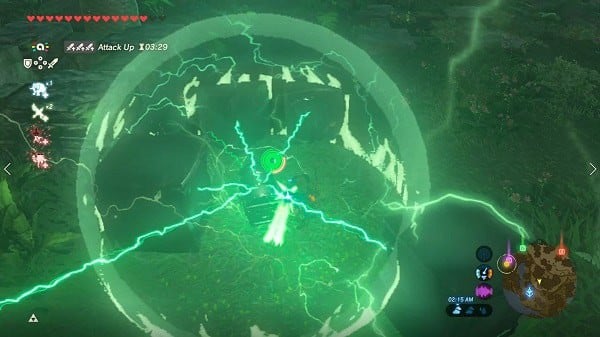 A combination of a Great Thunderblade and a metal chest will create a zone of lightning that deals continuous damage. This is quite useful when you need to take down a large number of enemies and your Stamina bar is extremely large. Have a Zelda amiibo set ready to be able to quickly summon a metal chest.

You can immobilize the frozen target to death, minus the targets that cannot be frozen, of course. 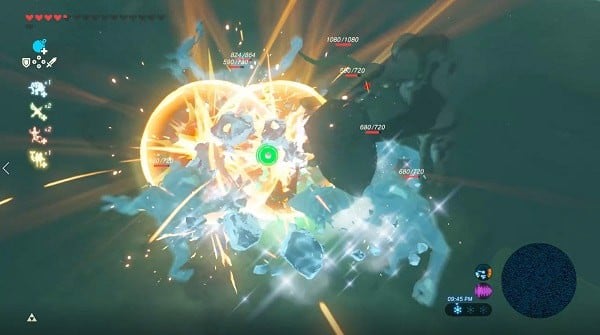 First have the ice arrow ready, then jump back to make Flurry Rush equal ZL + L ↓ + X When monsters attack, then press Y repeatedly let Flurry Rush, when the Flurry is near, press X + ZR aim at the target to freeze them, quickly swap weapon to Great Frostblade, hold on Y rotate weapon, as soon as your first attack hits the target, hold Y and press B + ZR to freeze continuously until the target is defeated.

If you want to make quick actions easier, you can use it Pro Controller Nintendo Switch or some other brand controller depending on your preference instead of Joy-con! 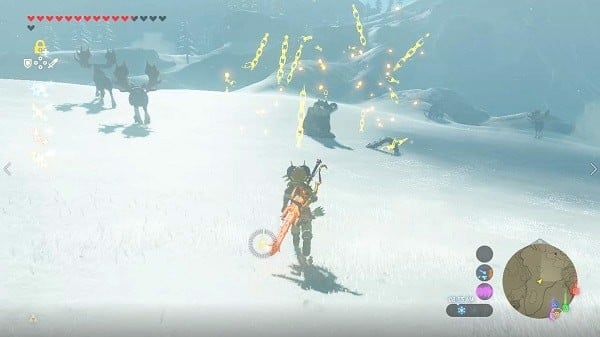 With the Guardians standing still, if you use stasis, they can be ‘grounded’. This can help you avoid unwanted battles when you run out of weapons, shields etc … or are busy aiming for another target.

Zelda Breath of the Wild has built an interesting attribute system. Do you remember the Chuchu Jelly obtained by Chuchu’s attribute? Link always slashes from right to left, if you place the Blue Jelly on the right, the Yellow Jelly on the left, when slashing will create a large electric shock, dealing damage to enemies in that range.

Frost Spear is stronger than you think

On frozen targets, Frost Spear will deal massive amounts of damage each time the ice breaks and freezes. 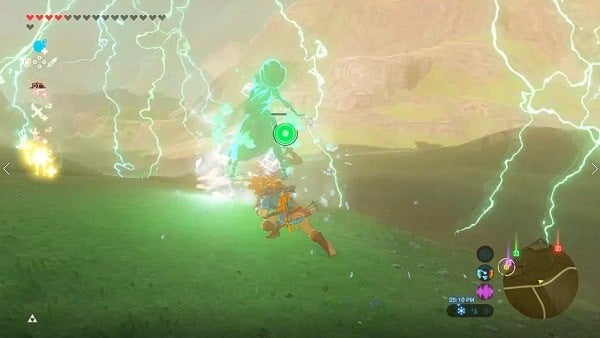 To be able to continuously freeze the target, after long press Y to perform a continuous stabbing series, switch to another weapon and quickly change back to Frost Spear to repeat the process. If you are intrinsic Urbosa’s Fury the amount of damage inflicted is even greater! 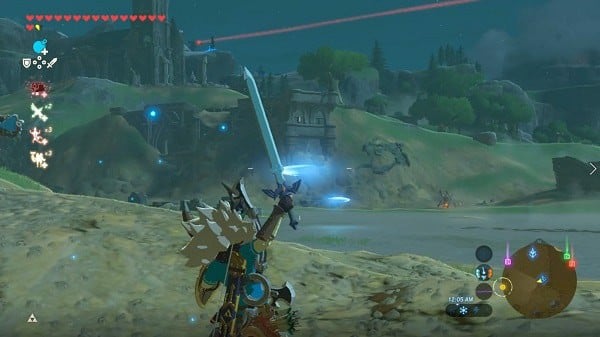 Instead of having to wait a while to continue throwing, you can throw the Master Sword’s long-range Beam continuously by switching shields between each throw. 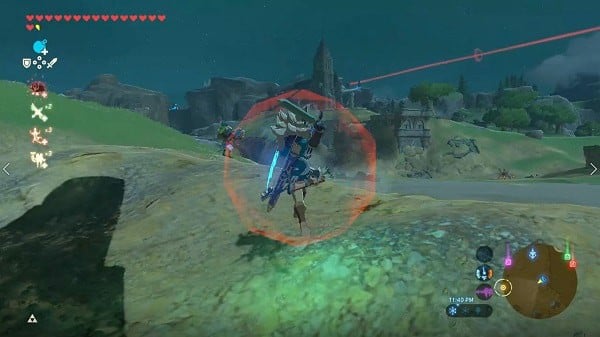 This key combination will be understood in a way of jumping back and forth without using Flurry Rush, useful in some special situations.

Launch your car at the enemy like a movie

If you already have Zelda DLC and unlock Master Cycle Zero, also known as a motorbike, you can use it to perform car launch streaks like Hollywood action movies. 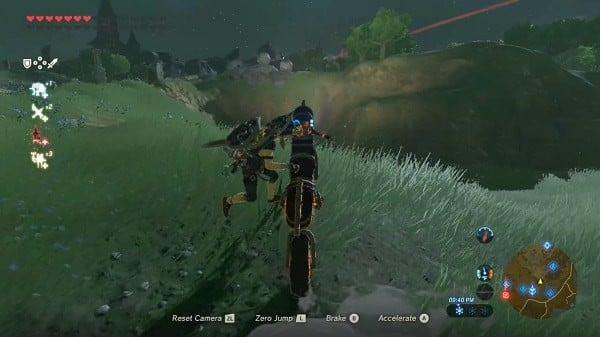 See more: What is DLC Zelda? How to play DLC Master Mode Zelda Breath of the Wild.

Get in the car, hold down the key B and A, then release the key B release and press again immediately and release the key A, so your car will dash straight ahead, just like in a movie. You can use this to surprise a small group of monsters, giving you a damage advantage.

Use the name Bomb to damage AOE

If you have completed the challenge Divine Beast Vah Rudania and yes Daruk’s Protection, you can take advantage of the Bomb exploding in hot environments like volcanoes to deal explosive damage on a large scale. 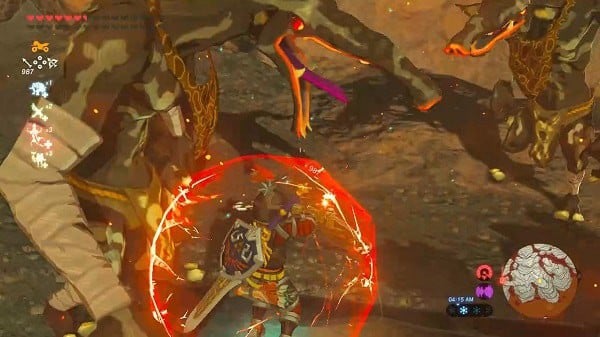 Of course this method is a bit messy, it takes the bomb name and takes time to coold Daruk’s ability, but seeing everything around explodes in a big way … quite worth it, right?

Self-detonate bombs to not take damage from monsters

It sounds weird, but if you detonate the Remote Bomb on yourself, you won’t have to take damage from monsters while being ‘thrown around’. It sounds a bit ‘miserable’, but this can save you from certain situations such as being hit by a monster to die in Master Mode in Zelda, avoiding having to travel from a long distance. Auto Save points.

There are still many other interesting things that this article has not mentioned, if you have good tips about Zelda, do not hesitate to share with other gamers!

Maybe you are interested: Hyrule Warriors: Age of Calamity – The Story 100 years ago Zelda BOTW

Source link: 20 things you didn’t know in The Legend of Zelda Breath of the Wild
– Emergenceingames.com