Although it has not appeared in Vietnam, the game is survival Tom and Jerry: Chase still attracts a great deal of attention from the gaming community.

Tom And Jerry: Chase developed by NetEase appeared in the Chinese market for a long time and recently this game has officially “set foot” on Southeast Asian land by pre-registration of the game through Google Play or Appstore But sadly, Vietnam is a country that cannot experience it yet.

Based on the storyline is a multi-episode cartoon with the same name associated with many generations of Vietnamese children, Tom and Jerry: Chase is a 1v4 style survival action RPG.

With the main gameplay still familiar chasing scenes, the player will play the role of a mouse or cat to perform the task of each character. If you play the mouse role, your mission will be to steal cheese, trick poor cat Tom and his friends to win. If playing the role of a cat, catch all 4 rats and tie them to a rocket 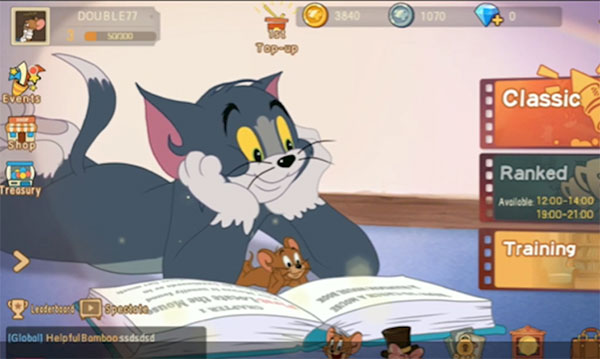 Every game in Tom and Jerry: Chase lasting up to 10 minutes at a fast-paced pace that makes gamers always in thrill and maximize the drama.

However, if you still want to experience this game, you can follow the instructions below of Fun Games on your phone. Iphone (on the phone Android do the same)

Step 4: You name your character and press Register

Step 5: You will be able to try the tutorial at the beginning of the game

Step 6: After finishing the trial, you will be returned to the main interface of the game.