Beginning in the game world, have you ever wondered what terms like DLC are? Then the words printed on the disc cover such as: Game of the Year Edition, Completed Edition, Deluxe Edition, Season Pass … are different from the game disc without those labels? Today nShop will answer with you terms related to DLC so that we can have a clearer view when buying PS4 games, Nintendo Switch from being mistaken or wrong. “Huh” Please! 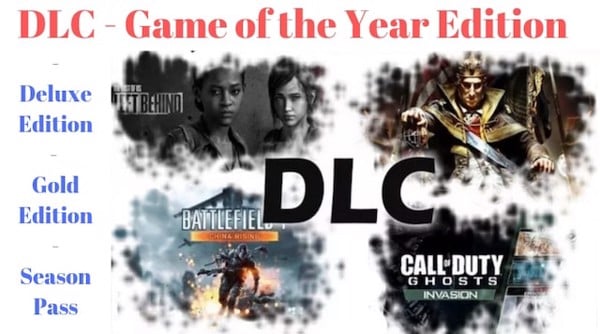 DLC stands for phrase Downloadable Content, which means the additional downloadable content of a game. Normally, when releasing a game to the market, in order to increase the attractiveness and engage long-term players, the developer will maintain a team that makes the game to create additional content to expand and sell. (sometimes free, depending on game publisher policy) on store like Steam, PSN Store, eShop Store.

So what is the difference between Update game and DLC?

Many people will misunderstand these two for the same, but in fact they are not. So what is the difference between Update game and DLC? Simply put, game updates are files that fix bugs, update game features, and DLC is more inclined to the game’s expansion content. For one specific Nintendo Switch game disc like Resident Evil Revelation When buying, it requires downloading more data on eShop to play it, it is just updating the game (Reason not enough storage capacity sold for Nintendo Switch game tapes Out of game content so the publisher requires players to download more from eShop to the memory card).

Read more:  Can PS5 controller play PS4? Find out before you buy!

There are some other games like Super Smash Bros. Ultimate then when buying the game, the player can Gold Point registration to be given a Piranha Plant, this Piranha Plant is the DLC (Because the game content is extended with character Piranha Plant). Conventional DLCs are sold rather than free due to the relatively high cost of maintaining the development team to add game content after selling the game.

What is Game of the Year Edition, Completed Edition, Deluxe Edition, Season Pass …?

If you have just started buying PS4 games, Nintendo Switch, when you go to buy the disc, you will see some places where the game disc has added text like Completed Edition where it is not and the price is also different. So what do the above words mean?

Thus, it is easy to understand that the games with additional titles as above are versions that include all of the DLC inside, you do not have to buy more. Well, there is a slightly different detail that is the Season Pass!

Read more:  What's in Animal Crossing New Horizons for the last 2 months of the year?

What is Season Pass?

Season Pass as the name implies, it is a certificate of this game disc you will be able to download all DLCs that from the time of purchase to the future the game developer sells more DLCs, you will be downloaded for free. This is the # 1 choice for gamers to buy PS4, Nintendo Switch or PC games because it will be more economical than buying “chuckle “ DLC one by one.

After learning what DLC is, many of you will surely ask, is it necessary to buy DLC? The answer is not required because most of the DLC does not include the main plot, the main content of the game. If you are concerned that buying a game disc is already expensive and costs extra DLC, then you can rest assured when buying PS4 games, Nintendo Switch, you can almost experience the main content that manufacturers want to include.

DLC is almost just something the producer wants you to have more experience if you are still sticking with the game after the content is finished.

Hopefully, after the article of DLC, you will have more equipment knowledge when buying PS4 games, Nintendo Switch to avoid buying holes such as game discs: Horizon Completed Edition The price is quite cheap, but you buy the wrong Horizon disc without DLC.