Cloud gaming may still be in its infancy for gamers today, Amazon Luna Being the latest platform to join the competition, the introduction of Amazon Luna proves that big companies are not afraid to invest in what has been dubbed the future of gaming. Amazon Luna with the backing from Amazon Web Services (AWS) and Twitch, Luna is very likely to take the throne in the cloud gaming race. After rumors surrounding more than a year, Luna was officially announced in September 2020. Let’s learn more about Amazon Luna with nShop.

See more: Cloud Gaming Nintendo Switch – The move to play against the Ps5 and Xbox Series

What is Amazon Luna?

Amazon Luna is a cloud game platform developed and operated by Amazon. Announced on September 24, 2020, Amazon Luna plans to release around 100 games when it launches in October 2020, with a demo price of $ 5.99 / month. and provided by Amazon Web Services. Luna will integrate with Twitch and will be available on PC, Mac, Amazon Fire TV, and iOS (as a web app) at launch, as well as Android shortly thereafter.

Amazon Luna is set to launch as a direct competitor of Amazon to other cloud-based game platforms like Google Stadia, xCloud, PlayStation Now, and GeForce Now.

When Stadia was still in the mood for what was up to, xCloud has just become more attractive than ever thanks to “deal of the century” Microsoft acquires Bethesda, then another cloud gaming service was quietly launched. That’s Luna of Amazon giant, a company also worth trillions of dollars and is slowly making its way into the lucrative gaming industry after dominating the stream segment with Twitch.

Like Microsoft’s Xbox Cloud Gaming platform, Luna also has a portfolio of Netflix-style games with monthly subscription fees. And like Amazon Prime Video, Luna also offers private channels for which users have to pay additional monthly fees. Currently, the only channel (other than the basic Luna Plus channel) is the Ubisoft channel. Amazon has partnered with Ubisoft to create a dedicated game channel for Luna that will give Luna subscribers access to Ubisoft titles the same day they release. This will come with an additional cost for the subscription, although the exact price has yet to be announced.

How much does Amazon Luna cost?

Amazon Luna currently has an early access price of $ 5.99 a month. This subscription includes unlimited access to a growing catalog of games and 1080p / 60fps streaming on two devices at the same time. 4K quality “coming soon” for some titles, but no exact date.

Luna’s price is said to be very reasonable, bringing high competition compared to existing cloud gaming. By comparison, Stadia is free, but the game is quite expensive while xCloud is included Xbox Game Pass priced up to 15 USD / month, Luna only about 6 USD in the Early Access period. According to Amazon, this price gives gamers access to the channel “Luna +” with a number of games including Resident Evil 7, Control, Tacoma, Rez Infinite, Metro Exodus, The Sexy Brutale, Overcooked! 2… 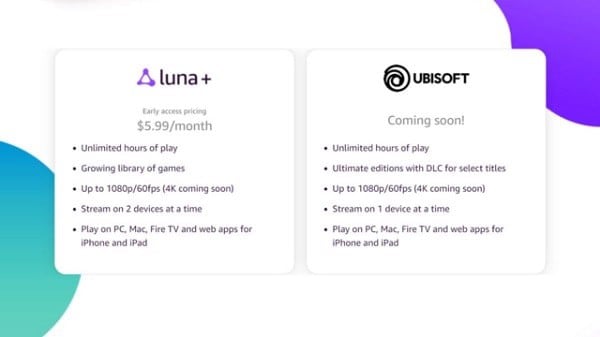 Channels are available for an additional fee, but this is not specified yet. The Ubisoft channel has the same 1080p / 60 quality and unlimited gameplay, but only for one device. However, it does have a final version of each game, with DLC unlocked for certain titles.

Read more:  What is the difference between Spider-Man Remastered and Miles Morales on PS4 PS5

If you want to get the most out of Luna’s features, you’ll also want to choose an Amazon Luna controller set. Amazon claims using the official controller can reduce latency from 17 to 30 milliseconds when compared to a standard bluetooth controller, which is huge for multiplayer titles. In terms of controller design, the Luna Controller closely resembles the layout of the hugely popular Xbox controller. There are also four buttons in the middle: Home, Action, Menu, and Microphone. At the bottom there is also a 3.5mm headphone jack.

The handle operates on two replaceable AA batteries, included in the box. You need to use the Luna Controller mobile app for setup but once it’s done, you can switch between devices freely.

The Amazon Luna controller set alone costs $ 49.99 or $ 59.98 when it comes with a phone clip. However, you can also use a PS4 Controller or Xbox One Controller or a keyboard and mouse if you want.

The Amazon Luna subscription includes unlimited access to around 50 games from a variety of publishers. The list isn’t as impressive as Microsoft’s Xbox Cloud Gaming portfolio, but it’s a solid start. The games are all running on PC, so in theory it should be easier to add games to Luna than Stadia, which is the equivalent of The game posted to Luna will be a lot sooner than other platforms.

Read more:  5 secrets to help you buy PS4 games, Nintendo Switch save the most! Here is a list of 76 games available on Amazon Luna:

Source link: What is Amazon Luna? Let’s learn about the latest cloud-based game platform in 2020 from the big Amazon
– Emergenceingames.com