Updates Minecraft 1.17 aka Minecraft Caves & Cliffs is scheduled to be released in the summer of 2021 and will come in both Bedrock and Java Edition versions. In this article, Taimienphi.vn will share with you some existing information about the content of this update.

Minecraft 1.17 update also known as Minecraft Caves and Cliffs is one of the most anticipated updates ever of the game, finally changing the cave system and adding lots of cool things. into the ground. New mobs, new blocks, and more are waiting for players to explore in this update, but unfortunately there’s still a long time to go until the update comes out. Below is the available information about the release date and the Minecraft Caves and Cliffs update content. 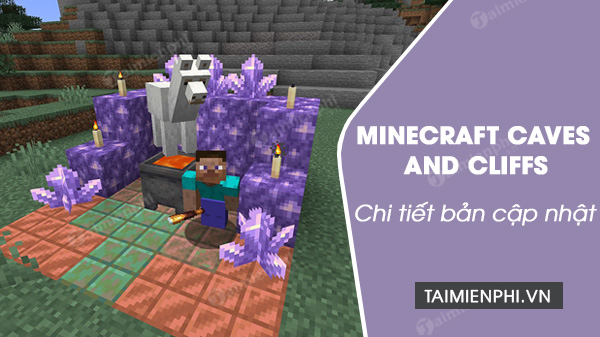 What’s new in the Minecraft Caves and Cliffs update?

The Minecraft 1.17 update is slated for mid 2021. The Caves and Cliffs update will release concurrently on both Java and Bedrock versions of the game, but Java players can test out the new features soon. by playing the latest snapshot version.

1. New caves and biomes in Minecraft Caves and Cliffs

Noise Caves are new underground caves and they come in two varieties: cheese and spaghetti. The Cheese Cave has a wide space with rock pillars, and the Spaghetti Cave is long, narrow and winding. These caves may also include aquifers, submerged cave systems with abundant ore inside. 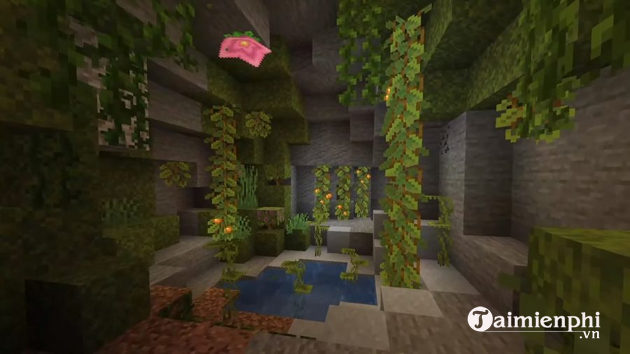 This is a cave system filled with vines, fruit and flowers falling from the ceiling. To find the Lush Cave, you have to try to find the azaleas (Azalea) on the ground. Their appearance indicates that there are Lush Cave caves below, where you can explore and explore. The creature system in Lush Cave is very diverse and you can collect some valuable resources from there.

Read more:  Answers to the game Deathigner from level 1 to 100 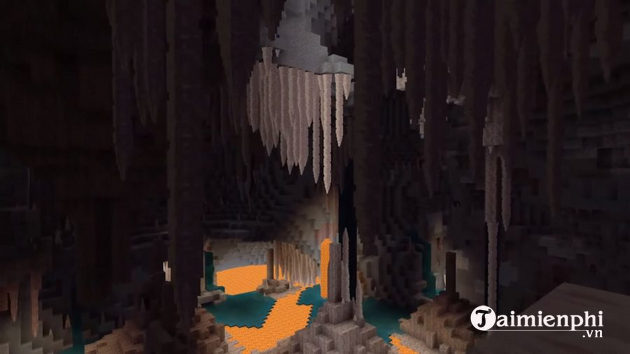 During the Minecraft Live event, Mojang hinted at a new biome called “Deep Dark”, along with some items and mobs here, but they haven’t introduced details about this biome yet.

Found in Lush Cave, Axolotls is found underwater. They are real creatures, are relatives of the cave salamanders. 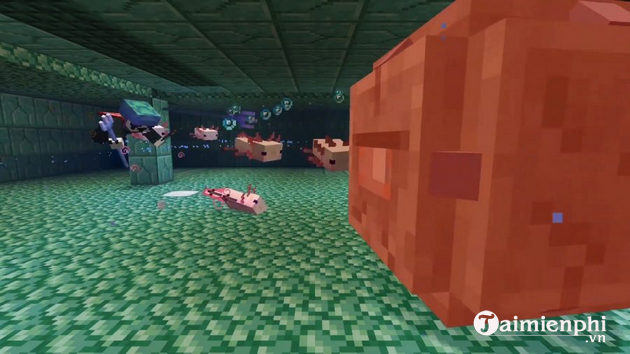 In Minecraft, they are your great companion for underwater adventures. Catch as many Axolotls as you can in the bucket and they will help you explore the underwater cave. They will attack enemies in sight and overwhelm stronger opponents with absolute numbers.

Goats appear in cliff areas and can jump very high, to exactly 2 blocks. Goats are gentle creatures, however, they are volatile and if you upset them, they will rush you and make you fly away from the snowy mountains.

When the goats crash into a block, there is a chance they will drop a goat horn, which you can pick up and use to make a trumpet sound. 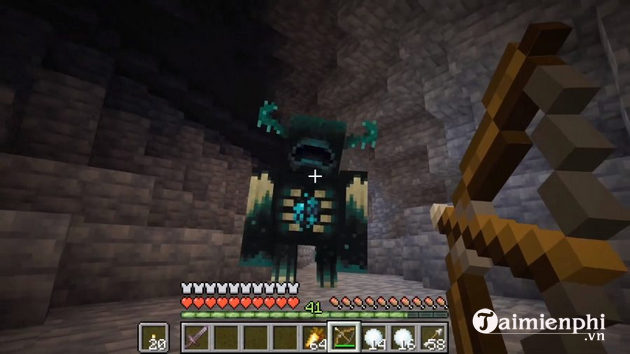 The Warden is found in the Deep Dark biome, and its sole purpose is to scare you. They are present in dark underground areas and are considered hostile mobs. The Warden cannot see, but they react to vibrations from the footsteps and the object being thrown. When encountering this mob, you can throw snowballs to distract them.

Read more:  How to get AUG Winterlands skin 2020 in Free Fire 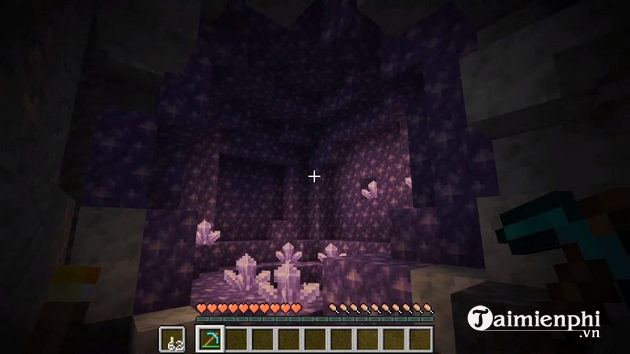 In some rare cases, you can find amethyst in the cave. Walking on the crystals emits a wind chime-like sound effect. Crystals are useful in crafting items, particularly in crafting new telescopes, which you can use to magnify details from a distance.

The recipe for the telescope also requires copper, a new resource. They are similar to iron but are orange in color. They are found in ore veins, can be used as iron to create blocks and terraces, and copper will be affected by time when exposed to oxygen. When oxidized, it is turquoise instead of brownish orange. 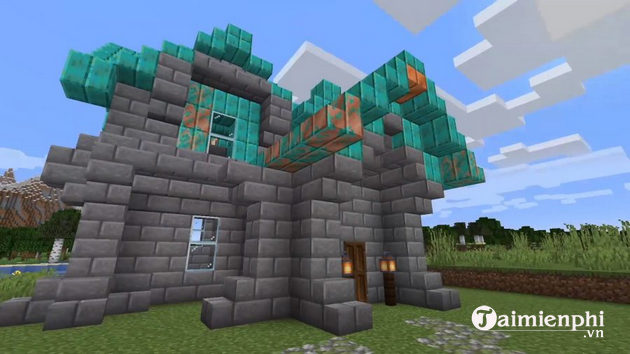 Copper can also be used to make lightning rods. They are used to direct lightning to the poles instead of flammable materials.

You can light up the shadows with the berth in update 1.17 – handcrafted from strings and beeswax. They can be dyed in a variety of colors and of course, can be placed on a cake to celebrate someone’s birthday.

Crafted from amethyst flakes and copper ingots, it allows players to zoom in on specific locations for a better view. 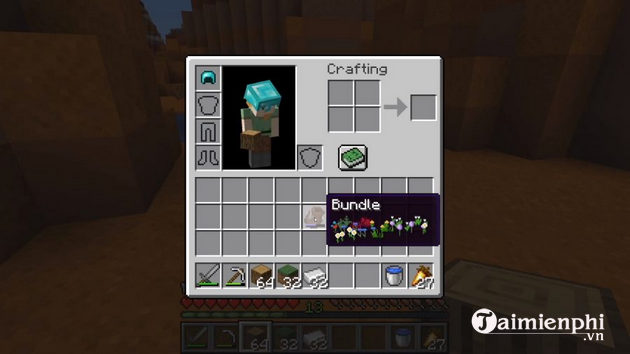 Finally, there are 3 new features coming to Minecraft via the Caves & Cliffs update. One of them is the Bundle, designed to help you manage your storage more efficiently. You can create bags or packages where you can put as many items inside as you want. Packages can be stored in chests.

One of the characteristics of the Deep Dark biome is that it is where Sculk Growths are found. This is a new energy source like redstone. If a Sculk Sensor detects footsteps or destroys / places blocks, it emits a redstone signal. They can be used to operate devices without a trace of redstone connecting the two devices. 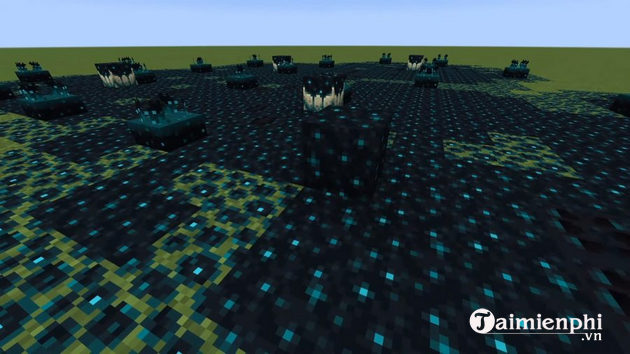 You can also use wool to prevent the signal from going through. Redstone Wireless’s possibilities in building giant city buildings or castles of Minecraft are endless.

This is probably the best addition in the Minecraft 1.17 update. On the surfaces, there are excavation sites that will appear. They have chests containing a small brush or broom. You can then use the brushes available at the excavation sites or create them with certain materials to wipe dirt and dirt out of what you find.

During excavation, if you are careless, you run the risk of destroying the antiques and losing them forever. However, if you are careful, you can unearth priceless items or rare blocks, such as a Blue Ceramic Shard or an emerald block.

And here’s everything that’s currently available about the upcoming Minecraft Caves & Cliffs update. There are some exciting new areas to explore and a terrifying monster to face, it’s best to be prepared, even Netherite weapons and armor don’t do much to the Warden.

https://thuthuat.taimienphi.vn/chi-tiet-ban-cap-nhat-minecraft-caves-and-cliffs-62653n.aspx
Besides, when playing Minecraft you can also refer to how to play Skyblock mode in Minecraft one of the oldest modes here.

See also: How to play Skyblock mode in Minecraft