Like the list of strategy games or FPS, so this is also the opinion of the writer, if you do not see your favorite game here, it is very understandable, hope you understand. And here is the list of the best horror games according to PCgamer:

Capcom’s super game really made an impressive mark earlier this year. The scary and secret things behind the Baker family in Resident Evil 7 really caught the attention and curiosity of many gamers. In the early moments of the game it makes you feel like you have to look around for fear that someone will grab you and the bullets you earn are more valuable than gold. Resident 7 really brought back the glory of this series, but we will still mention the Resident Evil HD version because both are great versions in different ways.

With a gloomy, harsh, scary atmosphere and surrounded by zombie-like people hunting you will make you experience heart-stopping and shivering moments. The game will show a Dystopian world full of death ready to take your life. If you like genres like this, I encourage you to try the Little Nigtmares game, although it’s not horror but it’s quite creative.

In the game you will operate a computer with built-in games: first you will participate in the adventure game set in a spooky house, and then you will have access to other areas such as the labyrinth. experience and dentist. And how the rings and areas connect is the mystery of the whole game, with a rather dark plot but if you figure it out, it won’t disappoint you at all.

Outlast 2 is a stealth horror game that may not be for everyone, but it has a rather interesting theme. The game will put you in the role of a journalist looking for his estranged wife Lynn in Arizona, your friend’s wife is kidnapped by a bunch of cultists. In your hand, you only have a camera to record scary moments as well as the only light source that you can see. Although it does not receive as many expectations as Outlast 1, this is also a game that you are worthy of your attention.

Before BioShock was born, we had System Shock which was a game that combined both RPG and FPS genres. The game has a rather fascinating plot about an artificial intelligence that haunts a spaceship, killing all the crew on board. Although possessing outdated graphics, at that time, graphics like this were enough to haunt gamers. It’s basically Deus Ex on a spaceship with creepy backgrounds and sounds.

Never ignore the horror pixel game called IMSCARED. This is a horror game with rather unstable graphics, but it has quite an interesting gameplay. Borrowing from horror games of the early 90s, it will give you emotions you never had before, leaving you feeling confused and brain-hacked until the end of the game. This is enough to make you jump in fear, if you think I’m bragging about it too much you can give it a try.

The game is set in a nightmare where you are a beetle, running down the throat into the head of a mad boss. And death also comes very quickly, the game is in the style of pressing buttons on the music but not any music but they are scary music and if you miss it you will pay for it.

We all have to agree that Silent Hill 2 is the best game in the series and even though Konami has never been interested in the PC community, if you’re interested in mods and graphics, this might be the time. point you want to play it most. This is the first game that really exploits a horror plot. Throughout the game dozens of questions pop up in your head urging you to play it until the end.

While Silent Hill and Fatal Frame rely on radios to warn the player of surrounding dangers, Sylvio uses an EVP (Electronic Voice Phenomenon) sound system to warn of surrounding dangers. Not only that, the game’s setting is a world revolving around a strange time, the player’s task is to discover the story behind this world, the surrounding things and the bizarre rotation. Sylvio is a unique and thinking game in the horror genre. 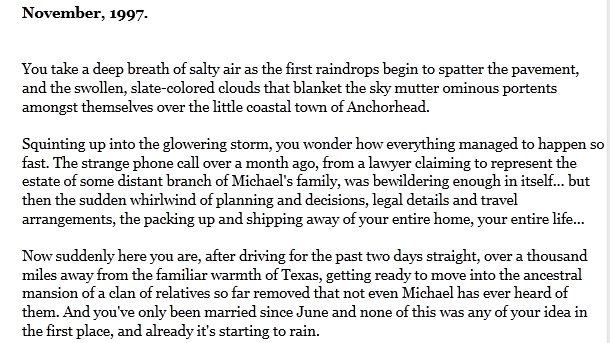 Who said horror games are all about images? You will have to withdraw this opinion after experiencing the Anchorhead game. This is a horror game based on many novels by writer Howard Phillips Lovecraft, he is famous for his fantasy opera genre. But his stories always have their own unique horrors. He largely draws inspiration from the people around him to write. The game is a combination of puzzles and requires readers to understand quite a lot, this is a game worth knowing.

Darksoul series has always been considered the most hardcore game series ever. The game follows a lonely, grueling battle through a world on the verge of collapse. You will see the glories of the gods and fallen warriors, but besides that you have to face the dark side of the nightmare, which are the Demons and the monsters. Will you be the warrior that enlightens the sky or will you fall and sink into the dark like the other soldiers?

The monsters in Dead Space attract gamers’ attention not because of its appearance, but because they can hide anywhere, including a small closet. In the game you will play the role of an engineer in a broken ship, surrounded by corpses with blood. Where darkness almost covers you, the only light emitted is from the gun in hand. Monsters can appear everywhere under your feet, in rooms you don’t notice, on ceilings and even corpses you thought they were harmless. Dead Space combines what the classic horror game has.

The city of Pripyat is now almost a dead city, so it’s not surprising that developers take it as a theme for their game. The entire game series focuses on a harsh and desperate battle, as you progress through the game you can find secrets and treasures hidden deep in this deserted city. And to do that, you need to ensure adequate food and weapons for your journey.

Who else is afraid of zombies? Probably because they are so scary. They are rotting zombies and are extremely ferocious when they see people and animals alive, it seems that their hunger and thirst never stops. Telltale game’s The Walking Dead really succeeds in portraying the characters in the game, the scenes happening are closely linked, sometimes you will have the feeling that it’s better than the movie. yes.

In the game you will be able to choose one of 3 characters, each of which has its own secret. Then someone wearing a mask explains to you the rules of the game: you will have twelve days to heal the whole town, and the time will cost you according to your actions. You must choose extremely wisely, gather resources and help your character to stop the epidemic in the town. Whatever you choose, the town continues to rot and the game’s ending is a horrifying one.

The Silent Hill is really scary, but compared to this game, maybe you should think again. Condemned: Criminal Origins really did a good job of simulating serial murder cases. In the game you will be a police officer looking for answers to the mysteries behind those deaths. And in the process of solving the case, you do not always meet favorable things when people think that you are the cause of those deaths. Although the game is ten years old, it is still worth playing.

What stands out about this game with only two words is Shinji Mikami (who is responsible for Resident Evil). The Evil Within is marking his return to the horror game genre, what the game brings true to its name, you will not have anyone to accompany you, where the town overflows. filled with zombies, monsters and murderers holding old chainsaws and moving bloodstains.

Frictional Game’s game really made a strong impression on gamers, after the success of Amnesia they proved that horror games are their strong point. Soma is a horror game with a first-person perspective, thanks to the first-person perspective, everything in the game is much scarier. In the game you will face hideous creatures and scary scenes that make you even a big guy shudder.

Like a stalker, but 2033 has something for me that I can’t take my eyes off. In 2033, 20 years after Russia was hit by a nuclear bomb, the surface of Moscow has become so dangerous from nuclear radiation and mutants that humans have to go underground to underground basements and sewers to escape. live. You will play as an Atom character searching for a way to save humanity and the secret behind the creatures called The Dark One.

The best alien horror game to date, causing fear for thousands of gamers. The game will guide people for 12 hours what it feels like to be hunted, Xenomorph tearing open the closet door and staring everywhere under the table in search of prey. They can smell, hear sounds or even a small flash of light is enough to attract them. This is what makes this the scariest game ever made.

19. Call of Cthulhu: Dark Corners of the Earth

Often times novels are difficult to convey to the viewer because not everyone has imagination. Call of Cthulhu: Dark Corners of the Earth is the horror since the launch of the game version, although there are quite a lot of errors and glitches, it still keeps the original of the novel, and what it conveys to gamer is its success.

Fear is probably a better shooter than a horror game, but the villain in the game is quite surprising because it is just a little girl named Alma who has the power to kill people with thoughts. Fear also exploits the player’s perspective to create fear. In the game you will encounter a scene where you see Alma’s light in the corner of the room when the lights are all broken, suddenly you feel that every step you take on the ladder becomes heavier due to blood staining, if If you want to know more, you should probably download it, but I don’t want to spoil it. Psychological horror themes continue in Fear 2 and Fear 3.

This is a game that has been associated with quite a few gamers and it is really happy when it was remade into an HD version at the beginning of 2015. Although it was remade, it still keeps what it is. jumpscare did not expect the mysteries behind the ruined mansion. Before long you’ll start to limp and regret what you’ve done, a nightmare indeed.

You can find other related articles here:

Source link: Top horror games on PC you should try once in your life
– https://emergenceingames.com/