With some homes with tight spaces, people often think of mounting a PS4 wall mount to save space similar to a wall-mounted TV. Actually advantage 1 but the damage to 3. What is the damage, let’s find out today with nShop! 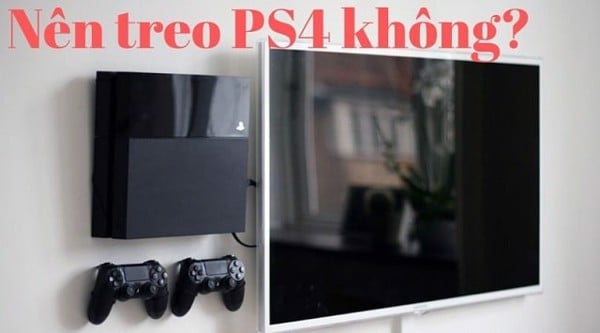 The answer is no! To save space in addition to the way you hang it on the wall, you can also place your PS4 in a stand (See more “Should PS4 stand or lie down”). Therefore, most of the reasons given by the seller such as saving space or being beautiful are not reasonable because the PS4 itself is not as big as the TV. (See PS4 size – Click) And if your TV table is narrow, it can be placed upright or lying down depending on the space still does not matter much. But the harm when you use the PS4 wall mount is real, more or less:

When hanging PS4 most types of shelves are designed to cover the machine to be fixed and attached to the wall. From there, the heat loss will be affected more or less. You should remember that in addition to the rear vents pushed from the fan, all other components are radiating heat, if too tight the air next to the wall will not escape, affecting performance.

There is a paradox that if the design of the PS4 wall mount is sturdy and tight, it will reduce noise – vibration but increase the temperature of the device, while comfortable and cool, the noise will be high. Why? Simply put, the PS4 is not the LG or Samsung TV you just bought: Every operation of the machine creates a certain vibration from the spinning hard drive to the internal cooling fan. 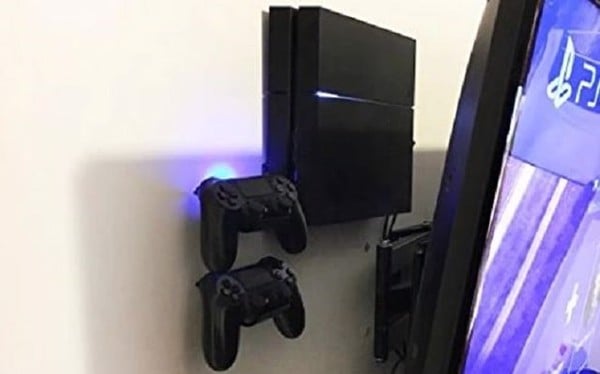 Therefore, when wall mounted, it increases the vibration and noise of the machine. If caught incorrectly, the machine will vibrate causing discomfort, affecting some internal parts such as the drive – reading eyes.

One thing you would not expect when mounting the PS4 wall mount is that every time you inject the disk, the gravity off when hanging the disc will easily fall to the ground. That is when you touch your hand but miss the edge. If you go out to the PES stone and see that the shopkeeper usually hangs the phone up high, it doesn’t matter.

In fact, at PES they rarely take the disc out of the machine. Hang up to limit visitors to the computer and game disc inside, take away the disc. If you are a home gamer, owning more than 10 PS4 game discs is normal and the problem of changing discs almost every day, is hard to avoid the risk. That is not to mention that children, children at home sometimes want to do it even more dangerous

The PS4 wall mount is only available for PES shops

PES stores often hang PS4s for many reasons, the most basic of which is fear of theft, minor harm problems that they can be temporarily ignored because considering over a long period of time. open PS4 store someone who maintains – maintain should also be acceptable.

As for gamers who use the machine at home, if you intend to save space or use the PS4 wall mount, it is best to carefully think about the long-term harm than the immediate benefit. According to nShop’s opinion – the best way to save money is to buy the PS4 stand to stand up rather than using the PS4 wall mount.